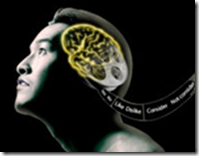 Implicit Association Test (IAT) is a psychological measure aimed at tapping into a person’s implicit mental attitudes towards a certain concept or issue. Greenwald, McGhee and Schwartz (1998) have led the way to the method that has now become widely used in many domains in social psychology and cognition.

The general basic IAT procedure is outlined in the 1998 paper with the following example : 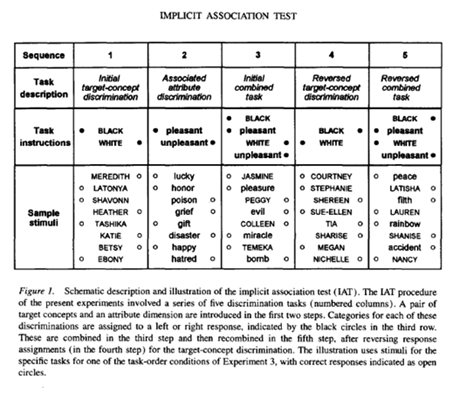 the result is a measure that looks at the response time differences between the 3rd and the 5th stages and examines error rates between the two conditions.

One could think of many ways why this would be useful, and if you wish to play a little with the procedure and perhaps learn a thing or two about your mental associations and attitudes you can go to online projects like the Harvard Project Implicit.

Watch this next video for the IAT and racial issues:

I recently decided I’d like to play with this a bit and design my own association test, so I began looking at software options available for low-budget researchers, like myself. Turns out, there are a number of options to consider that do a fair job even in comparison to the commercial software packages.

During the last year readers contacted me through this blog about an IAT solution. I haven’t been doing IAT for quite some time and wasn’t up to date so couldn’t really make suggestions. I’ve just heard of a new open-source solution that might be of interest to you to incorporate IAT in Qualtrics.

has been updated with an impressive version.

All files and supplements can be found at https://osf.io/ntd97/

Our preprint [Conducting IAT Research within Online Surveys: A Procedure, Validation, and Open Source Tool], which discusses the survey-based method in detail and presents three validation studies, can be found at https://psyarxiv.com/hgy3z/. Please read this manuscript in detail prior to using iatgen.

Another promising package by Tom Stafford & Robin Scaife at the University of Sheffield.

Details can be found in …

Everything below this line is OUTDATED and only kept as a record of past recommendations. Please see and use options from updates above.

Following are the options I found :

The FreeIAT was created to provide a free, open-source alternative to commercial software used to administered the Implicit Association Test. The FreeIAT is intended for Psychologists and others with professional training.

FLXLab is a very complex scripting software for psychology experiments. They provide rich documentation and script examples on how to design the IAT experiments :

This demo utilizes two separate scripts; make sure to run the one called master script.

The experiment is set up so that you can do your own IAT just by modifying the master script, the instruction files, and the stimuli files. You can display words, pictures or a mix as stimuli; see the file experimental1 stimuli for an example of how to set up the stimulus file to do this.

If you prefer running the IAT online for easier test administration and data collection, consider…

This is an open-source, web-based version of the Implicit Association Test (IAT; Greenwald, McGhee, Schwartz, 1998) that takes the category labels and items as input and outputs a file of all responses and response times.

[Updated 2012/01/02] Online IAT has been further developed and enhanced into WebIAT.

[Updated 2013/01/19] Just saw Winter Mason present at SPSP the new version of the project at Github. Check it out.

PXLab is a collection of Java classes and applications for running psychological experiments. The PXLab system allows interactive design of a wide range of experiments from all areas of psychological research. It includes a run time control system which runs experiments under highly optimized timing constraints.

[Added 2013/10/29] Seems like someone made an IAT version that fits into Qualtrics and can therefore easily run in MTurk.

But the code is a bit buggy and some report occasional missing data and problems, so beware.

If you can afford something better or don’t mind software trial periods, you can consider the following options as well :

Hi, what would you recommend if I am trying to embed an IAT into a Qualtrics study? I have limited technical experienced but collaborate with people with more. Thank you!

Sena – yeah, that’s tricky. I’ve actually done that, but it requires a great deal of technical expertise, with some HTML/PHP/JAVASCRIPT programming and an indepth knowledge of the Qualtrics mechanism i describe in the post here (passing on variables, embed variables, etc.). I would recommend using the WebIAT platform.

If you don’t have those skills my recommendation would be to get in touch with the Project Implicit people and see how to work with them.

None of these worked. When i downloaded them, I just got a load of files, like instruction pages, but not an actual application for it. Have I missed something?

Rachel – you need to know a thing or two about how PHP/HTML/JScript server side applications work. you need a server or a host that supports those standards (probably your university tech staff can help), you then upload the files to the server and access the main index file through a web browser. Anyways, you need someone who knows about tech to help you with those.

Do you have a tutorial on how to do this?

I need to design my own IAT and preferably distribute it across the internet. Do you have any other suggestions on what I could use? I installed Inquisit and made a script for my IAT, is there anywhere that I can use this script for distribution over internet?

Inquisit has a web version – http://www.millisecond.com/products/inquisit3/web.aspx but it costs money.

you could also try and contact project Implicit. https://implicit.harvard.edu/implicit/ . they are sometimes willing to collaborate with other researchers and they’ll take care of the technicalities for you.

there’s no tutorial you can read that will help you set that online IAT up if you’re not proficient with web development, which you obviously aren’t. better found someone who is.

Hi, I have a basic question – but I thought you might be able to help. I’m designing a picture stimulus IAT with inquisit and can’t seem to upload images as stimuli – does anybody know how to do this? I have entered the file name by hand but I get a ‘don’t recognise file path’ message like this” / items = targetA / please verify that the target path xxxx is correct” (the file path is correct!)

Emma – I suggest trying the Inquisit forums for help on these issues. I’m not an Inquisit expert, I’m afraid.

Hi, is it still necessary to use Greenwald et al., 2003’s SPSS syntax to analyze the reactions times gathered in these different ways? I’m assuming yes but wanted to make sure these methods do not include computations of the reaction times into d scores.

Hi John, these are just data collection methods, not related to analyses.

Hi, I was wondering: did any of these software have the option of turning off the “wrong” or “right” answer factor? I want to use a version of this test that just allows participants to attribute a word into a category, and not force them to make “the right” choice? Is this possible programme wise? Is this theoretically possible within the use of an IAT? (as in, does the test loose its validity in such a format or something?)

Hi Alex. I’m afraid I don’t know. But it sounds like something rather simple to setup with one of the classic experimental software, like Inquisit.

Hello!
Thanks for the information. I used the Online IAT. Now I am wondering if there is a possibilty to have a balanced design?
When I tried the same category came always first.
Thanks.
Yvonne

Hi Yvonne, you can tweak their code in any way you like, it’s open-source.

Hello This is Anum Urooj from La Trobe University, Melbourne, Australia. I’ve just started working, as a PhD student, in the area of homosexuality under the supervision of Dr. Arthur Stukas and co-supervision of Dr. Anthony Lyons. Specifically, my research is on “A Cross-cultural Examination of the Relationship between Implicit and Explicit Attitudes Towards Homosexuality, Self-concepts and Sexual Orientation Related Behaviours.” I’ve gone through your website and the available softwares. Could you please tell me that which software is the best for running Sexuality IAT? Moreover, can I construct a test of my own using these softwares? Your cooperation and… Read more »

IAT is IAT, it doesn’t matter if it’s about sexuality.
This post was written a while back, so it’s very possible that there are new things out there.

Hi,
I am hoping to run an online IAT as part of a larger experiment. I was wanting to use BOS online survey to collect data and then finish off asking participants to complete the my IAT so perhaps I would add a URL link at the end. Do you know if this is possible? If it is possible, which IAT is the best one to use?
Many thanks,
Lauren

Hi Lauren, Online IAT is open source, you can edit this in anyway you like, and it should be really easy to automatically forward to any URL of your choice at the end.

Hello!
I wanted to ask if it possible to add a questionare before the IAT?
I am very thankful for any help!

Hi have you heard anything about the bug in IATgen that causes a black X to appear in the top left corner when imported to qualtrics? Is this a common problem for people?

I’m not sure, but this is not the right forum to ask. I suggest commenting on the IATgen project directly, they seem to have active developers that would assist with any problem.