In the 90s the personal values research domain led by Rokeach (1968, 1970) has gained a significant momentum with Schwartz’s work identifying ten cross-cultural value categories falling into two dimensions on a circumplex : self-enhancement vs. self-transcendence and conservation vs. openness to change. Most of the research in this domain followed value measurement using the Schwartz Value Scale (SVS) requiring the person to indicate how important a certain value is to them on a scale between –1 (opposes my values) to 7 (critically important). While there were some other scales introduced throughout the years, like the 40-item Portrait Values Questionnaire and its 21-item shortened version that was included in the European Survey, there still seems to be a gap between the values and the attitudes domains in the investigation of methods that would implicitly tap to people’s personal values.  (following values figure and table adopted from Maio’s 2010 paper, but appears in almost all of the values related articles) 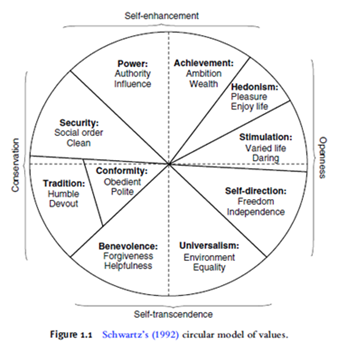 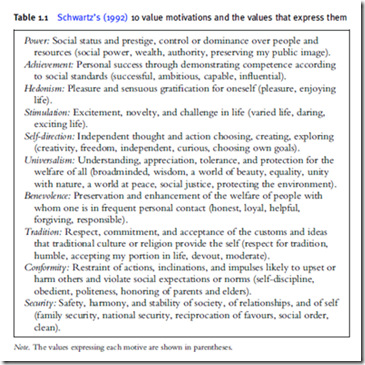 One of the papers looking at values using implicit methods is Pakizeh, Gebauer & Maio (2007, JESP) where they measured reaction times of the second value importance rating in value pairs of differing distance on the values circumplex : 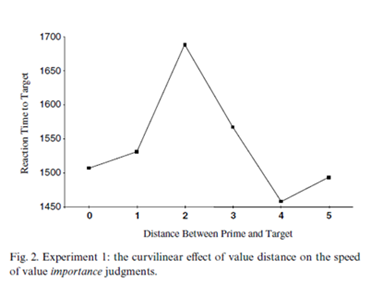 Participants took less time to rate the importance of the second value in pairs of values from the same and opposed domains than from unrelated domains.

The second experiment they ran contrasted two values and measured response time to the decision which is more important. 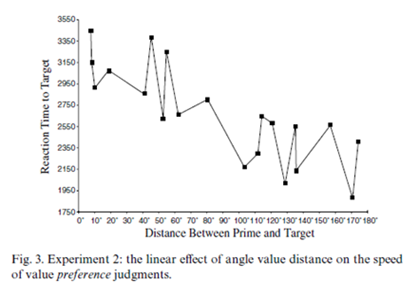 But while this provides support for the theorized values structure and taps into the person’s implicit generalized values dynamic structure it does not enable the researcher to implicitly measure the participants’ values hierarchy to indicate what the person values. This experiment still asks the person directly how important a value is.

In a recent 2010 review on “mental representations of social values” Maio goes deeper into the issue of implicit values assessment :

Although social psychologists have consistently treated values as conscious, explicitly reportable constructs, it may be useful to add implicit measures to the battery of methods for assessing them. Implicit measures can isolate automatic evaluations of values.

The first obstacle is that values involve judgments of importance and not differences in evaluation per se. That is, as described earlier, people ‘‘like’’most values, and the issue is not whether they elicit the strong positive or negative evaluations that are the hallmark of attitudes.

I believe this issue can be overcome if one looks at me vs. others rather than positive vs. negative or important versus unimportant.

I believe the two contrasts on the values dimension help with this in some regard, so that one can contrast between self-enhancement to self-transcendence, but we might not need any contrast at all as Miao indicates:

To avoid this problem, it may be preferable to use an implicit methodology that does not require a contrast category, such as the Single Category Implicit Association Test (SC-IAT: Karpinski & Steinman, 2006).

There are other similar options, like the Go No-Go Association Task (GNAT, Nosek & Banaji, 2001, SocCog). It’s a variant of IAT that doesn’t require a contrast category.

We have recently begun developing an implicit measure of values that overcomes these obstacles (Gebauer et al., 2009). This measure modified the SC-IAT (Karpinski & Steinman, 2006) to assess the 10 lower order value domains described in the circular model. Across several studies, the measure exhibits satisfactory reliability (most as > 0.70) for all of the 10 lower order domains and even higher reliability when they were collapsed into scores for the four higher order domains. Moreover, scores on the implicit measure correlated significantly with participants’ scores on the SVS. Furthermore, scores on the Value-SC-IAT were less strongly related to social desirability than the SVS but were related to scores on a measure of value-expressive behavior (Bardi & Schwartz, 2003), even when controlling for the SVS. This evidence provides a basis for optimism in the utility of complementing extant measures of values with implicit measures of values.

I read through this paper, and the SC-IAT results, especially using good-bad looks promising, so there’s cause for optimism.

Another upcoming conference presentation goes in the same direction with a presentation titled “The Structure of Implicit Values: Applying the Implicit Association Test to Schwartz’s Model of Basic Values” (Vecchione, Dentale & Barbaranelli, 2011):

Yet their argued results are not inline with Maio’s yet supporting the values dynamic circumplex structure:

This reveals a certain degree of dissociation between implicit and explicit values, which appear to tap different constructs. Principal component analysis and Pearson correlations with prosocial behavior corroborated the circumplex structure of implicit values, which seem located in the hypothesized order around the motivational circle.

So, following Greenwald, McGhee and Schwartz (1998, JPSP) if we were to use the simple IAT perhaps we could adjust the method to the following design :

The Go No-Go Association Task can be used in a similar way.

Hi Gilad, very interesting article. I think there is a large opportunity to use the SVS, not just as a cross-cultural value framework, but as a personal value framework as well (it’s also what we base our program on). The values within the SVS instrument provide a great, common language of understanding when coaching for values.