Luckily, I was able to find two activities that address those specific issues. We’ll start off with leadership. 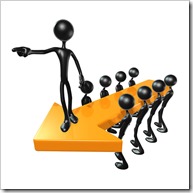 Leadership on the Go provides a “library of activities for inside and outside the classroom”, and offers the “Leader versus Follower” activity (page 30) :

Sometimes we must be leaders and other times we must take the role of a follower. To be a good leader you need to know how to follow. In this activity participants will […] better understand how to be both an effective leader and follower.

I adjusted the activity a bit with the following handout :

The handout was folded so that the inside content was hidden and the instruction were faced outside. Students were asked to stand infront of each other and once told they needed to move around their hands in perfect sync while not being able to talk.

I gave students a minute to play around with this and requested that they keep absolutely quiet and continue the movement no matter what. Needless to say the students were ecstatic about this exercise, even though they weren’t sure what it was about.

Once the timer hit 1 minute, I asked them all to take a seat and open the handout leading to the second page, and then reflect together on who assumed the rule and answer the relevant questions – “who led?” “how was it decided who will lead?” etc.

Then, they switched roles and played for another 30 seconds, after which they needed to answer “how difficult was it to switch roles?” and “was anything different in the second time?”

Though some of the students insisted that the role assignment was completely random and that “it’s just a game” it was obvious that some students realized that there was more to it than that and this provides a good basis for a follow-up discussion. 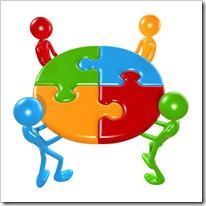 The group related experiment was even more interesting. This experiment was meant to test the “tragedy of the commons” behavior in a competitive environment where the group has the ability to collaborate in order to maintain and even increase availability of needed resources. This activity is based on Edney’s 1979 paper “The nuts game : A concise commons dilemma analog”. PsycSite suggests paperclips/pennies, I brought in candy to class to make this more real and ran this with groups of 4 volunteers.

What is this tragic bias? Here’s a good quote from Wikipedia :

In economics, the tragedy of the commons is the depletion of a shared resource by individuals, acting independently and rationally according to each one’s self-interest, despite their understanding that depleting the common resource is contrary to the group’s long-term best interests.

The game is simple. These were the two rules displayed on the projector:

They were told that the number of rounds was predetermined randomly (it wasn’t, I was waiting to see what would happen) and that they will NOT be told when the last round will be.

After placing 4 candies on a table infront of the participants and making sure they all understood the rules I started the timer. After several seconds of hesitation a student came up to the table and took all the candies. Everyone in the class laughed. It was a very brief and concise demonstration of a disturbing effect.

Now the interesting thing is interviewing the students why they decided to take or not take the candies was based on gut instinct that upon reflection seemed to make no sense to them. The student who took the candies couldn’t articulate why he took all the candies and didn’t leave anything to be doubled in the next round. The others weren’t sure why they didn’t take any candies at all.

Rerunning this an even more curious phenomenon happened. Although I forbade it, they used body language to agree to coordinate not to take any candies at all. But this lasted only two rounds. On the third round one of the students, once again, went to the table and took all 16 candies. The students that were watching were as amazed as I was. When asked the student reacted that he used the façade of collaboration to trick his classmates to increase his own gain. That’s perhaps even more disturbing, though atleast a bit more sophisticated and slightly less irrational, depending on what student you talk to.

After a short class discussion I was about to wrap it up when one student suddenly said that this whole behavior happened just because I didn’t tell them how many rounds there were and that if they knew they would surely collaborated. That was terrific, I immediately took the opportunity to invite her to test her hypothesis and brought her up to stage with 3 other volunteers. I then told them they had exactly 3 rounds to play. The students seemed sure that this would work.

But, to our amazement, at the beginning of the second round a student quickly came up to the table and took the 8 candies. When I interviewed her why she took it in the second round she replied casually “I knew the other students might be planning to take it all from us in the third round so I beat them to it”. So much for collaboration when the number of rounds is known.

To sum it up – it was brilliant. I couldn’t have hoped for a better demonstration of the “tragedy of the commons”.

Give those a try, tell me how it worked out.

Thanks for sharing! I will use these in my class for sure