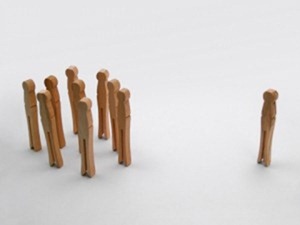 If you’re not familiar with the bias, here’s a quick explanation from Wikipedia:

In-group favoritism, otherwise known as in-group–out-group bias, in-group bias, or intergroup bias, refers to a preference and affinity for one’s in-group over the out-group, or anyone viewed as outside the in-group. This can be expressed in evaluation of others, linking, allocation of resources and many other ways. This interaction has been researched by many psychologists and linked to many theories related to group conflict and prejudice. […] Experiments using minimal group paradigm have found that even arbitrary and virtually meaningless distinctions between groups (e.g. the colour of their shirts) can trigger a tendency to favour one’s own group at the expense of others.

For this experiment, I adopted the activity from CROW‘s :

This worked brilliantly, much better than I expected.

I separated the class into two – a group of those who were wearing sports shoes and those who weren’t. It was about a 50/50 split. For each of those groups I assigned an observer whose role was to be outside the group and observe the group interaction. The observers had a piece of paper in which they were asked to indicate the statements being made in the group about their own group versus about the other group separated into positives and negatives. The groups were competing for cookies I brought in and their goal was to write as many reasons as they can in 3 minutes as to why the other group was or wasn’t wearing sports shoes.

This was the observer’s sheet.

Then, a representative from each group was asked to come up and tell the class all the reasons. The groups performed about the same with about 19-20 reasons, but it was already very obvious that most of the statements about the outgroup seemed very negative (lazy, poor, bad taste, etc.). The effects with the observers made it even clearer with about a 1:2 ratio of positives 2:1 ratio of negatives for the outgroup:ingroup.

From the end of semester feedback, seemed like many of the students really enjoyed this one and have learned a valuable lesson.

Try it out, tell me how it went.

Going to try this tomorrow – looks great! Thanks for posting!

Did it work? I would like to use it too!

It worked very well for me… twice. Give it a go and report back 🙂

It’s a really fun and useful excersice in class. Instead of using tennis shoes, I formed a group of iPhone owners and no-iphone users. Being Mexican students, the economic divide was pretty obvious.

What does “being Mexican” have to do w/ it?