Bringing real social psychology experiments into the classroom is one of the best ways of teaching psychology, but it’s never easy, especially when you need to apply deception in the classroom. But, I was able to pull it off.

One of the classic social psychology experiments was conducted by Asch (1951) on group conformity. Here’s a brief description of the mythology and results in Asch experiment from PsycWiki (image credit):

Asch gathered seven to nine male college students for what he claimed was an experiment in visual perception (Asch, 1955). All were confederates but one, and when he entered the room, the others were already seated in a row (Hock, 2005). After taking his seat, the study began. The experimenter revealed two large white cards: one with a single line (the standard line) and one with three lines of differing lengths (the comparison lines). One of the three lines was the same size as the standard line, and the other two were of varying differences: from three quarters of an inch longer or shorter to one inch and three quarters longer or shorter. Participants were asked to verbally announce which of the three comparison lines was equal to the standard line (Asch, 1955). On the first two trials, the group unanimously answered correctly, but on the third trial, the confederates all gave the wrong answer (Asch, 1955). Each study had 18 trials, 12 of which the confederates gave unanimous incorrect answers (Asch, 1955). They gave correct answers occasionally so that the participant did not suspect collusion (Asch, 1955).

To make things more clear, watch this next video :

Since I know that in each of my sessions there are always some that are late, I decide to try and use that in order to run an in-class version of the Asch experiment. I asked my teaching assistant to stand at the door stop late comers from entering the class for 5 minutes which I used to brief the students in class to serve as my collaborators. I used the same task as Asch did with a comparison of one line on the left to the three lines on the right asking the students to indicate which line on the right is most similar to the one on the right. Only, I asked my collaborators to systematically choose the wrong line, with the premise that once I ask a few of them and turn to the late-comers then late-comers would feel the pressure of conformity.

The following four rounds were used : 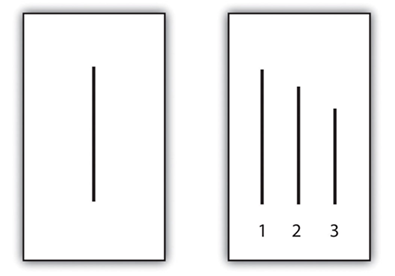 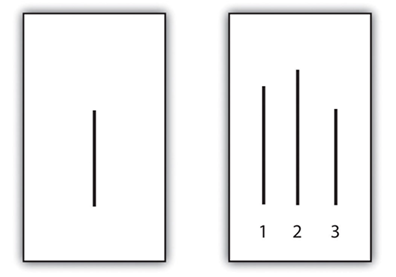 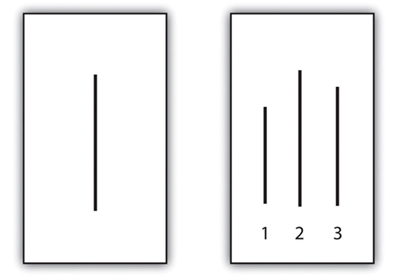 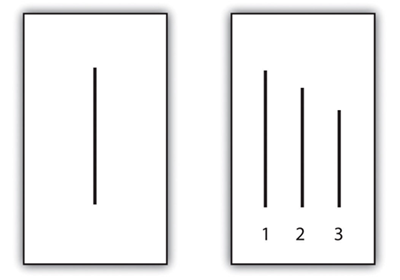 After bringing in the late-comers I explained that the purpose of the task was to measure cognitive abilities and then explained the task at hand and went on to run the round. Each round I would – as if randomly – ask a few of the collaborators what their answer was and then choose one of the late comers.

It was quite hard for the collaborators to keep a straight face and there were a few giggles, especially as the late-comers stared at the board and their classmates in disbelief. While in the four rounds no student “gave in” and they all answered what they really saw it was apparent that the lag in their answers increased and the expression on their faces turned more concerned. After the four rounds I asked the late-comers about what they experienced and it became clear that the conformity effect was indeed taking place and greatly confusing them upto a real dilemma as to whether to answer in a truthful way or according to group pressure.

To read a bit more on the Asch experiment:

If you’re considering on running this, then perhaps running a few more rounds would have shown the effect in full force. Try this out with your students and tell me how well it worked for you.

I’m going to try this today – thank you so much for this resource! Is there a way to print this? I’ve tried and it’s all jumbled together. Thanks

Hi Lisa, thank you for pointing our the problem. I added a “Print this page” below the title next to the date. Hope that works better for you.
Let me know how it went. Good luck!